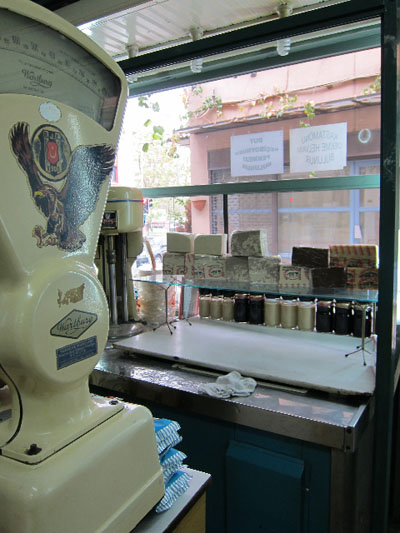 [1]
(Editor’s note: We are sad to report that after more than a century in business, Merkez Şekercisi has closed.)

Despite the surroundings, working as a candyman in Istanbul is apparently not all sweetness. Take, for example, Mustafa Bey, who inherited the 132-year-old traditional Turkish candy shop, Merkez Şekercisi, from his grandfather. On one recent afternoon, he grudgingly answered a few questions as if we were neighborhood ragamuffins begging him for a free piece of lokum.

Without looking up from the sports page he answered, “Well, I’m 56 years old, so I guess I’ve been working here for 56 years.” Mustafa has always been here. End of discussion.

Luckily, there are sweeter things to behold in the historic Balat neighborhood’s Merkez Şekercisi than Mustafa Bey. The house-made lokum dusted in sugar, the ekmek kadayıf and the wide tray of baklava in the front window had us captivated. While Mustafa weighed out a generous slab of the ekmek kadayıf, we sat at the one and only table and enjoyed the pleasant time warp provided by the shop’s vintage scene – the mint green hue of the room (a jarring reminder of previous generation’s tastes), Formica counters on which a large enameled scale sat (perhaps it was Mustafa, in his own mischievous youth, who slapped a Beşiktaş soccer sticker on the grand old Wartburg candy scale?), and a jalopy of a cooler in the corner that chugged and hummed.

If the décor was left over from Mustafa’s grandfather’s days behind the counter, the ekmek kadayıf was absolutely of the moment. Two slices of syrup-soaked bubbly shortcakes sandwiching a schmear of bright white kaymak – this can be a gooey mess within hours of preparation. The one at Merkez was pleasantly saturated but firm, the kaymak a comparatively crisp note between the saccharine decks of ekmek kadayıf.

We skipped the baklava and summoned Mustafa to the lokum counter. Double pistachio is the Ferrari of Turkish delight – flashy and expensive, it’s designed more to impress others – and the one at Merkez shining green with nuts was certainly tempting. But instead, we asked Mustafa what flavor his grandfather favored. He cracked a smile and said, “He loved güllü” – rose-flavored – “lokum.”

We left Merkez Şekercisi with a small bag of the shop’s güllü lokum, eating it as we followed the narrow streets through the Balat market. Perfumed gum drops – in most cases, an offering we’d politely decline. But standing outside of Merkez and thinking about Mustafa’s grandfather and the Ottoman period he lived in opened up new dimensions in our sweet tooth. Later, as we walked past supermarkets and corner stores stuffed with Gofret bars, Cadbury’s and Ülker’s latest creations, we started to understand Mustafa’s gloom. He’s probably the last guy on the block who still remembers the heyday of güllü lokum.