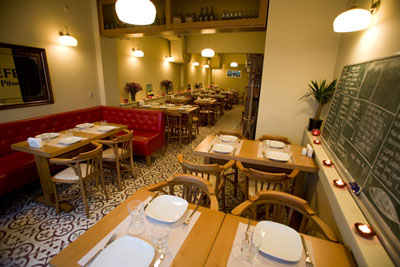 [1]
Dear readers, we have a confession to make: over the last few weeks, we were in a serious culinary funk. The main problem was our own lazy habit of sticking around our home base of Beyoğlu when it came time to forage for new places to eat. The neighborhood, of course, has no shortage of restaurants, especially these days, when it seems difficult to keep up with all the new places opening up in the bustling district. But most of these new places have left us cold, if not downright disheartened; they seem more intent on packing in the crowds to offset their high rent than on providing good, interesting food (or, as in the case of new place we saw descriptively called “Shot,” serving any food at all).

Just when things started looking desperate, tipster ST whispered a mysterious word in our ear: Sıdıka. It sounded a bit like an incantation, but it was actually the name of a small meze restaurant and café. Its location, in the down-to-earth Beşiktaş neighborhood, made it even more intriguing.

Although not that far from Beyoğlu, Beşiktaş still feels like a proper neighborhood, with an appealing pedestrian market area and lots of little eateries that seem focused on feeding the locals rather than marauding weekenders. That said, the nabe is also spiffing up a bit, now home to Istanbul’s glitzy W Hotel and a nearby row of upscale shops and boutiques. But, unlike Beyoğlu, the area still feels like it has a nice balance between the old and the new. It makes us think of parts of Brooklyn (before Brooklyn became “Brooklyn”).

Sıdıka, located just up the street from the W Hotel, fits perfectly into that balance of old and new. Open for only a few years, the place already feels like it’s been there forever, radiating an inviting warmth and attracting a crowd that on a recent Saturday night ranged from scruffy hipsters to a boisterous group that could have been their parents. Inside, there’s old-school jazz playing in the background and a long chalkboard up against the wall listing what’s available. Sıdıka (it’s also the name of the restaurant’s owner) serves salads and pastas, which we’re sure are very good, but it’s the restaurant’s Aegean-style mezes and fish dishes that justify the trip to the wilds of Beşiktaş.

The restaurant’s grilled eggplant meze, for example, made us realize how much that simple dish has been degraded around town. Here it tasted of smoke and mellow, creamy eggplant and nothing else. It was among the best renditions of this meze classic that we’ve had in a long time. “Lettuce dolma” – a leaf of romaine wrapped around a mix of fish, rice and herbs – was also a delicious revelation, as was a chunky, light green spread that turned out to be an utterly delicious mash made out of feta cheese and chopped pistachios. A cold meze made out of beetroot leaves that had been stewed in olive oil also left us deeply satisfied.

We finished our meal off with very nicely done sea bass fillets wrapped in vine leaves and then grilled. Although not an uncommon dish, Sıdıka’s struck us as uncommonly well prepared, coming off the grill with the vine leaves still moist (as opposed to brittle and charred, as is sometimes the case), with their distinctive briny tang working as a nice counterpoint to the fish.

Used to Beyoğlu’s high prices, we received something of a shock when the bill arrived at our table. Dinner for two, with a small bottle of rakı, was an extremely reasonable 120 lira.

Our faith in Istanbul’s food restored, we believe we will be spending a lot more time in Beşiktaş from now on.