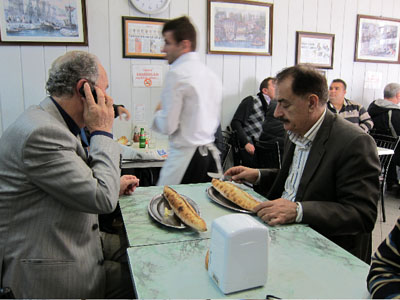 [1]
Inside Fatih Karadeniz Pidecisi nothing could be heard over the crunch and crackle of fresh pide being torn open and chomped down upon.  Still, the man across the table from us spoke in a low, conspiratorial whisper, “There are some very well-known businessmen sitting at that table by the window. They all come here,” he said. It seemed to us that everyone in the crowded little dining room was well-known, at least among themselves. They greeted one another with a handshake, backslap and an “afiyet olsun.” While waiting for their pide to arrive, they barked commands into their cell phones and related workday anecdotes to the rest of the table. This place felt like the antechamber of many a local businessman’s office, with a twist: superb karadeniz pide.

Until this moment, we’d never encountered such a noisy bread in Turkey. Nor had we ever seen a pide quite so long or standing so proud at its ends. In pide heaven, clouds are billowy doughy pleasure boats and this placed smelled as if we were floating on one. Intoxicated by the atmosphere, we failed to flag down the harried waiter for quite some time. “As if they are sending the pide in from Rize!” a hungry fellow at our table exclaimed earning some nods and chuckles from the other tables.

Even if the service is a bit slow, the ordering process is straightforward. There’s peynirli pide with cheese which is open-faced and kiymali or minced meat and onion pide which is customarily closed like a long, slender, ridge-backed calzone, but a karisik has one side of cheese and the other with meat and it is offered open. On all pide, a topping of raw egg is offered. We’d usually pass on this, until we watched a group of men at an adjacent table simultaneously see-sawing their pide to distribute a freshly cracked egg across the entire face of the pide, leaving a bright yolk slick that quickly set.

When our karisik with egg finally arrived we mimicked the see-saw motion to spread that yolk from bow to the stern while the pide was still hot and the egg still runny. We took the pat of butter wrapped in wax paper and rubbed down the ridges of crust until the butter was no more. The waiter stood by patiently throughout the whole affair and took our pide back to the counter for slicing.

Every part of this half-and-half pide was performing at its highest level. The kiyma side sang the high notes of a fine lahmacun, while the cheese side offered a deep, rich backbeat. The egg slick – particularly the application of it – was a novel part of the ritual but, in our opinion, an unnecessary one. But the skills of a pideci are proven in the crust, not in the toppings. And this crust had the craters and ridges of a lunar landscape while remaining perfectly formed and remained sturdy against the butter bath and a thorough egging. It was chewy on the inside and startlingly light and crispy on the outside. It’s that crust and its hallmark crunch that has kept this place packed for more than 50 years. But don’t take our word for it, just ask any well-known businessman in Fatih where he eats pide. Or, roll down the window, listen carefully, and just follow the crunch.