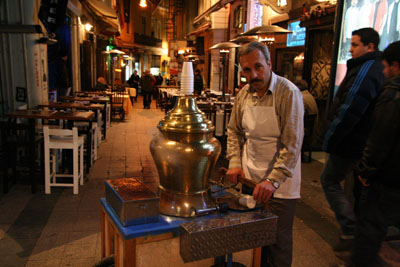 [1]
Cemal Bey sits behind a desk in a small, bare office on the second floor of a decrepit building near the Egyptian Bazaar in the city’s old quarter. Three large burlap sacks filled with what look like jumbo-sized yellow raisins are all that adorn the room. That and a fax machine. The window behind him frames one of Istanbul’s many transfixing cityscapes – the Golden Horn stretching out under the Galata Bridge where it meets the Bosphorus and the Marmara Sea, departing ferries churning the water white – but Cemal keeps his eye on a fax that’s coming in. A wholesaler of salep (dried wild orchid root, also spelled sahlep), which is pulverized into powder that’s mixed with heated milk and turned into a wintertime delicacy drink of the same name, Cemal counts among his clients some of the big shots in Istanbul’s ice cream world, as the powder is also used to thicken their product. They fax in an order and he sends them kilo-sized plastic bags of pure white salep powder. He chafes at the mere mention of the roving salep vendors who work the streets of Istanbul.

“Just because a man sells salep doesn’t make him a real salepçi,” he offers as a warning.

“Thieves! They’re putting pulverized pasta in there, bread, whatever. I heard they even grind up animal bones and call it Avrupa salep. Frauds! They sell it for 7 TL per kilo. Think about that. A kilo of real salep, the pure stuff,” he looks over to the sacks, “costs 180 TL per kilo.”

He did, however, recommend a few addresses from his client list where we could drink the real thing. We followed one of these tips over to the Asian side to compare the real thing with the street salep we’ve been hooked on for years.

Ali Usta
Most people harp about the ice cream over at Moda’s Ali Usta, which is indeed worthy of a full review, but we came for Ali’s real-deal, uncut salep.

Our taste for salep was acquired on the street, which is something like growing fond of Mexican food in Dushanbe, so our salep palette was way out of whack when we arrived at Ali Usta. We were expecting that eggnoggy, extra-sweet, starchy liquid jolt with a cinnamon topping. Actually, we were expecting all of those flavors to be ramped up, somehow more “salep-y” on account of the purity levels promised to us by Cemal.

As it turns out, real salep is not such an exotic drink at all. There is a mild herbal hint carried by fresh milk and just a touch of cinnamon, but it bears little resemblance to the carnival of flavors we know and love from the pushcart. Ali Usta’s salep makes itself known in the consistency. Whereas street salep is a bit gluey, Ali Usta’s is pure silk. Exotic as the flower from which it is extracted, salep is just a starch in the end and one that benefits from lots of sugary, flavorful additives.

As fine as Ali Usta’s salep was, next time we head out to Moda we’ll have a double scoop of his pistachio ice cream. We will save our salep drinking for those spontaneous moments when we see the brass salep samovar mounted to a rickety pushcart round the corner on a rainy day.

“Sahhhhlepppp!” the man will shout, and we won’t correct him or inquire about purity levels or even wonder about the presence of animal bones. For better or for worse, this is the salep we know and love.