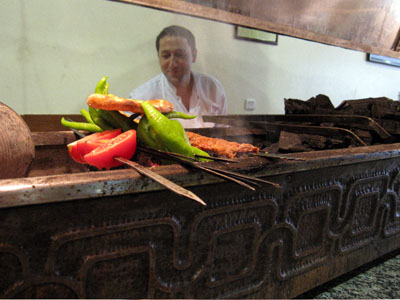 [1]
“What would you say if I offered you a very tender lamb filet marinated in garlic?” a voice boomed from behind the grill, its source obscured by an ornate copper hood decorated with a scene of kebab heaven – sheep, shepherd and steppe. Was this Saint Peter in kebapci disguise asking trick questions at the pearly gates? There could be only one correct answer. Gluttony is punishable and we’d already eaten a full meal at Musa Ustam, the Beygolu kebab house where Hassan works his magic. But envy is equally sinful, and without having this kuzu fileto as our own, we’d surely suffer kebab-envy of our fellow diners.

We looked within ourselves and answered, “Yes.” Just then, Hassan usta, the grill man who would be God, ducked down and flashed us a wide grin through the smoke of the grill. He worked beet-red hunks of lamb the size and shape of sea scallops onto thin metal skewers. A dark stream of marinade leaked down Hassan usta’s forearm as he held the skewers up for our approval. Be it the key to paradise or to eternal damnation, who could refuse this kebab?

Musa Ustam is considered Beyoglu’s premier purveyor of Adana kebab, a spicy ground lamb sheesh hailing from Turkey’s arid kebab country to the south. A Malatya man himself, Musa got his training in Adana and headed for Istanbul where he and his disciples have been serving up a very fine Adana since 1972. This traditional kebab house has street-side seating – perfect for people watching – but we prefer to sit at the marble counter that circles the grill like ringside seats.

On one recent visit, before the question of kuzu fileto was posed, we ate a delicious Adana kebab that crumbled pleasantly and smelled of grill smoke.  A delicious gavurdagi salad of freshly chopped tomatoes, onion and parsley was doused with pomegranate dressing – a sort of palate cleanser between kebabs.

We were just considering an order of kunefe, a dessert finely shredded pastry stuffed with cheese, when Hassan convinced us to consider another kebab. The thick medallions of lamb filet were as tender as promised and unusually rare, more suited to a steakhouse than a kebab restaurant. With the last wedge of flatbread, we wiped the plate where the remains of grilled tomatoes, peppers and juice from the meat pooled, a sinful pleasure that Hassan usta approved of with a smile.