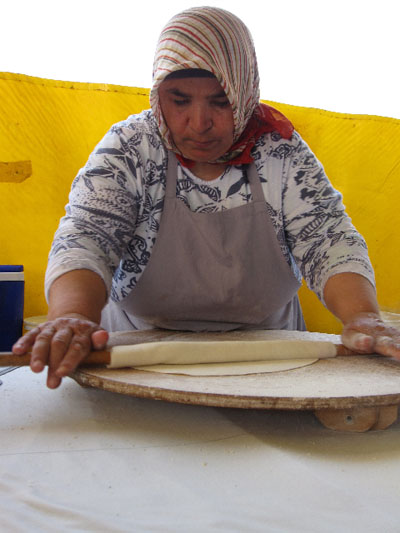 [1]
“You’re going to make mine thin,” said an old man with Coke-bottle glasses.

“Not too thin, it will break. We load these full of stuff, sir, and it’s all organic!” replied Hacer Hanım.

“Whatever, just make mine thin and put some cheese in there,” the man grumbled.

Hacer Hanım turned her back on the crusty old codger to face Us, her concerned audience, who’d already questioned her about the origins of her farm-fresh cheese (the Aegean island of Gökçeada), funky little mushrooms (the Black Sea’s Kastamonu) and mixed greens (Zonguldak, also on the Black Sea). “On Saturdays during the organic market, we are just too busy! Actors, models, wealthy people, people of culture, Japanese people even, they are all eating my gözleme. And it is all organic!” the grand dame of the griddle chirped, as if in a commercial.

Hacer Hanım was charged with the fillings – a mouthwatering selection of mashed potatoes, mixed greens, crumbled white cheese, and mushrooms – and working the large convex griddle while filling the air with a steady stream propaganda for all things organic. However, our eyes were fixed on the tubby little Anatolian lady beside her, steadily working through a large wooden box of dough and a pile of flour. Here was a living Anatolian culinary tradition at work.

In Sultanahmet and other more touristy neighborhoods, ladies like her are set up among kilims and farming tools in the front window of “authentic” restaurants misleadingly advertising “Turkish pancakes.” We always imagined these tired-looking ladies shackled to a radiator under their worktable. But here at the Organik Pazarı, located in a dingy covered parking lot in Feriköy, this gözleme master laughed and bickered with Hacer Hanım. When we asked her name, she giggled and blushed, holding up her index finger covered in flour. “Birgül,” she said. “One rose.”

To the pleasant, rhythmic thwapping sound of her constantly rolling wooden pin working a ball of dough down to a thin skin, we wondered if Birgül Abla felt that sweeping arm motion in her sleep like a sailor’s wobbly-legged walk on shore. Somehow, she looked created specifically for the task of rolling out gözleme and completely content with the pin in hand.

“Thin, ok?” the old man barked from his stool.

“Not too thin!” Hacer Hanım ordered.

We left the thickness of our gözleme up to Birgül Abla and it emerged a large half moon cut into strips with promising lumps here and blackened corners there. It was completely familiar, yet delicious.

After countless gözlemes in villages, roadside stands and once from a rocking boat on the Mediterranean, we’ve probably grown immune to its goodness. Like car horns, cats sprawled out in the shade and Bosphorus ferries, to us, it has become part of the stage that is Istanbul. But the unusual combo of Hacer Hanım and Birgül Abla caught us by surprise, reminding us that this simple, ubiquitous snack is really an Anatolian masterpiece – farm-fresh produce with a woman’s touch.

After thanking the two for an excellent gözleme, Hacer Hanım said, “Come back on Saturday to see the market. They even have organic laundry detergent!”