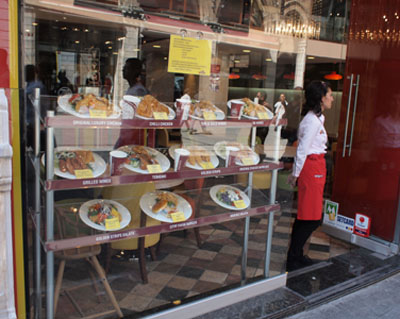 [1]
A rather intriguing bird named BBQ Chicken Café recently landed in the heart of Istiklal Caddesi, Beyoglu’s busy pedestrian-only boulevard. A large, two-story restaurant with a big, bottle shaped character that stands outside and accosts passersby, BBQ belongs to a rapidly expanding Korean fried chicken chain whose claim to fame is frying its chicken in olive oil (which explains the character out front).

BBQ’s arrival was greeted with a touch of derision by some Istanbulites who link fried chicken to the American – rather than the Korean – south. But those who scoff at the notion of Korean fried chicken make us think of those shortsighted Americans who fifty years ago laughed at the idea of Japanese-made cars. Who’s laughing now? If you follow the latest fried chicken trends (as, of course, we at Istanbul Eats do religiously), you know that when it comes to deep fried bird, Korea is currently where it’s at [2]. In fact, BBQ (short for “Best of the Best Quality”) is only one of several Korean chains that, in recent years, have been taking the fried chicken world by storm. BBQ, for example, has more than 3,500 restaurants in some 37 countries. Watch out, Colonel Sanders!

BBQ is no KFC, though. Rather than a fast food joint, it’s more akin to a fried chicken lounge, with stylishly upholstered chairs and the lobotomizing sounds of late-period Sting playing over the sound system. The chicken, instead of sitting under heat lamps, is cooked to order.

The dauntingly expansive menu features poultry in various guises, but we went for the “Original Luxury” fried chicken. The fowl, cooked to order, arrived steaming hot with a small serving of coleslaw and uninspiring wedge-cut French fries on the side. (Sadly, the meals at the Istanbul BBQ don’t seem to include pickled daikon radish as an appetizer, something that is part of the menu at the chain’s franchises in other parts of the world.)

BBQ claims that frying the chicken in olive oil results in a final product that’s crispier and lighter, which certainly was the case – the chicken’s nicely textured and golden fried coating was wonderfully crispy and not at all greasy (although still far from health food). But, despite the menu’s promise that the chicken had been marinated in a “secret” sauce, something was missing in the flavor department, as if in its rush to empire, BBQ had banished any trace of the chicken’s Korean origins. What we had on our plate were a few pieces of expertly fried chicken (in olive oil, no less), but nothing told our taste buds about the food’s provenance.

We had high hopes for the place and will probably return to try something else on the massive menu. But, based on an initial visit, our take is that BBQ fries, but it doesn’t soar.