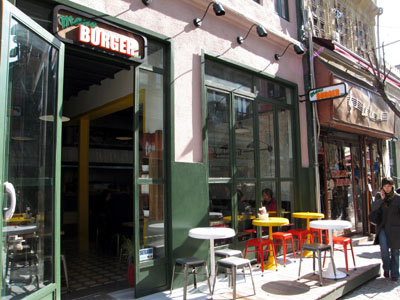 [1]
(Editor’s Note: Turkey is not unfamiliar with cooking ground meat – it is the home of köfte and kebab, after all – but hamburgers (at least the kind we’re used to) have never really been part of the landscape. That seems to be changing, though. Recently, a whole new crop of “Western-style” hamburger spots have opened up in Istanbul, giving burger lovers some hope that a new day has arrived in the city. We tried out some of these new places (as well as an old standby) and will be reporting our findings this week. Today, we take a look at two spots in the hip Nişantaşı and Tünel neighborhoods.)

This place, part of a British chain that seems to be spreading around the world at a rapid pace, was recently named by both Time Out Istanbul and Hürriyet as having the city’s best burger. An English burger? Could the product of this British Invasion be the Beatles of the hamburger? We decided to investigate at GBK’s Nişantaşı branch (there are a few others around town), located near the tony ‘hood’s main shopping district. 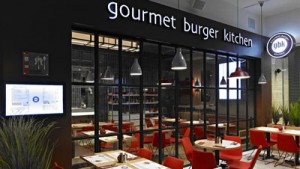 [2]meanwhile, seemed to be designed by committee, with 12 kinds of beef burgers (Mexican, Thai, Cajun, etc.), seven different chicken burgers (the thought of the Camembert & cranberry one lingering unpleasantly in our mind) and a few veggie burgers.

We opted for the “Classic” burger, an all-beef patty that came served on a sesame bun with onion, lettuce, mayo and tomato “relish,” a fancy take on ketchup (surprisingly, GBK’s kitchen doesn’t stock pickles). Sadly, the hamburger disappointed. The bun was nicely toasted, but the patty it held was a dry, thin, characterless, machine-made disc that reminded us of the hamburgers we used to eat in our junior high school cafeteria. The emaciated single ring of red onion sitting on top of the burger struck us as particularly measly, especially considering that the burger cost 14 lira (without fries, which are an extra 4 lira).

Our vote on Gourmet? Gour-nay.

This new Tünel hamburger joint’s owner, a former basketball player turned restaurateur, spent some time studying in California, where he also worked for a spell flipping burgers. This up-close-and-personal experience in the hamburger’s homeland certainly shows up, in both the food and the surroundings.

The charcoal-grilled burger is as a burger should be: tasty, messy and fun to eat (although, perhaps because of the fat content or the cut of meat used, still a few shades away from tasting like a “real” American burger). Mano’s bun, which seems to share some DNA with brioche, does a good job of holding everything together, although a single patty does seem to get lost inside the substantial thing, so we usually order a double burger. The hamburgers, several named after places in California, come topped with caramelized onions, pickles, lettuce and the secret “Mano sauce” (which tastes suspiciously like a mix of ketchup and mayo). The shoestring fries served on the side are excellent. (Average price for a burger and fries is around 13 lira.)

Mano also gets the burger vibe right in its décor. The restaurant is stylish but fun, with tables and stools outside painted in shades of ketchup, mustard and mayo and banquettes inside built out of old car seats. Like a good burger joint, it already feels like a neighborhood institution, the kind of place you wouldn’t give a second thought about dropping in for a quick meal and where you don’t mind leaving the place with a trail of “Mano sauce” on the front of your shirt.