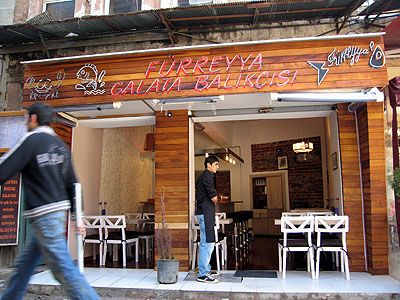 Still, we’re looking forward to grabbing a meal at the new-and-improved Furreyya, which has become one of our absolute favorite places in town. Besides expanding the place, the owners have put in a new kitchen and have given the restaurant a spiffing up, with a new wooden façade and a completely remodeled interior. The menu remains the same, for now, although one of the cooks told us some new items might be in the works (Ismael, one of the owners, even promised a wine menu at one point, but the presence of a mosque across the street might get in the way of that).

For those not familiar with Furreyya, here’s a bit from our original review [1] of the place:

But the menu also holds some very rewarding surprises. Balık koftesi are delicious fish cakes cooked over the charcoal grill and served with a squeeze of homemade basil aioli. On occasion, Fürreyya serves up its tasty take on mantı, tortellini-like miniature pockets of dough that are usually filled with ground meat but here are made with fish. The highlight of the menu, though, may be its most humble offering: the balık durum, a tortilla-like wrap filled with grilled fish and caramelized onions. At 6 lira for a durum, it’s one of Istanbul’s best and tastiest deals.