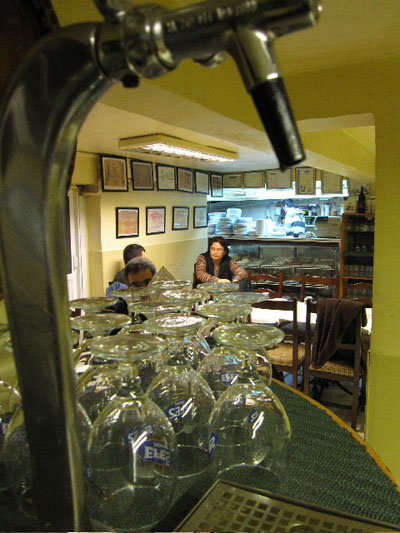 It wasn’t quite as dramatic as Meg Ryan’s big moment at Katz’s deli in “When Harry Met Sally,” but a low-register, guttural moan of pleasure was detected from our table upon our tasting of the shredded celery root in yogurt, a house specialty meze at Beyoğlu’s Çukur Meyhane. And we weren’t faking it.

We stop into scores of meyhanes, or traditional Turkish tavernas, and eat more yogurt meze than we care to report, all for the sake of finding that one masterful meze among the goopy masses. Most meze in Istanbul are fine, but very few can be considered orgasmic.

Çukur Meyhane, a small, slightly shabby, basement meyhane in Beyoğlu’s Galatasaray area, certainly does not look like the kind of place with any shining stars on the menu. On our last visit, the floor seemed to be covered in a mixture of sawdust, table scraps and some cigarette ash. The tiny open kitchen occupies one corner and the VIP table – where a group of old timers were watching horse races on TV, scratching at racing forms, cursing, cheering – takes up a slightly larger area. A good bit of the other half of the room is home to a giant ornamental wooden beer barrel. Meanwhile, the overworked guy in jeans and a hoodie taking orders looks more like the bass player in a jam band than a waiter. In short, food does not appear to be the priority here.

But that’s a grave misunderstanding: at Çukur, it’s all about the food (and, well, maybe a bit of rakı). Çukur’s chops come through with the first bite of that cold spread of garlicky strained yogurt loaded with celery root and purslane, topped with a barely detectable drizzle of olive oil and – perhaps in a nod to the old-timers inside – what seemed to us to be flax seeds. Spread on a piece of freshly toasted bread, this dish transports the taste buds to a winter garden wonderland where earthy root vegetables rule the roost. This meze alone is enough to ensure a return visit.

But there’s more from the cold side of the appetizer menu. A small meze of charred red peppers with crushed walnuts – evoking both spicy and smoky tones – offered the perfect response to that rapturous yogurt. And two frequently played-out meyhane staples –  patlıcan salatası, a smoky puree of eggplant, as well as the soslu patlıcan, cubes of fried eggplant in a tangy tomato sauce – were expertly made and reminded us just why they are such classics. In fact, while we were deliberating over what to eat, a diner seated at the next table came over and insisted that we order both, post haste.

And then there was the restaurant’s ciğer, or liver. Sliced into thin strips that are lightly fried and then dusted with red pepper, this ciğer was exceptionally smooth in texture and mellow in flavor, with none of the “livery” taste usually associated with the dish. If we’re not mistaken, the ciğer brought out another moan of pleasure at our table.

Çukur serves up other meyhane classics, such as grilled lamb chops and köfte, but – somewhat unusually – the folks at Çukur  have also figured out how to grill Black Sea sardines, or hamsi! Long considered a lost cause by grill men for its tendency to slip through the grill and into the coals, hamsi is usually fried or baked. At Çukur they’ve thrown caution to the wind and worked about ten of these little squirmy fish onto a skewer and bookended them with tomato and pepper. Hamsi is agreeable in just about any form, but fresh off the grill the fish’s characteristic smack of the Black Sea is even more pronounced. Side by side, hamsi and ciğer are a perfect pairing: a poor man’s surf and turf.

While we were moaning about the meze, we saw a table of fellow diners eating what looked to be a very good dish of kabak tatlısı, a dessert made out of oven-roasted pumpkin. But alas, when the time came for our sweet fix, all that was left in the kitchen was a plate of sliced fresh fruit. Next time we’ll arrive a little earlier, or spend a little less time getting all hot and bothered over that first meze.