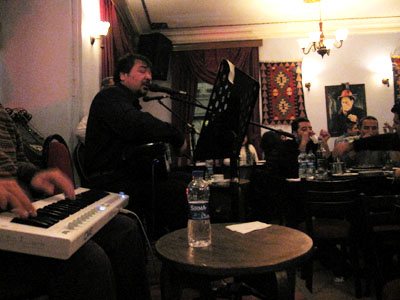 One night in Otantik, a Türkü (Turkish folk music) bar in Beyoğlu, delivers all the emotional peaks and valleys of life itself. As the saz-strumming bard on stage moans out the first few bars of a familiar song of lost love, even the table of stony-faced, rakı-drenched fellows in leather jackets melts with a sigh. Then a foot-stomping number gets rolling and out come the handkerchiefs – if not to wipe a tear then to flap at the band in rapturous approval. Before long everyone is dancing in a wide circle, pinkies interlocked, in a synchronized, shoulder-shrugging shimmy led by one fellow who is either waving a napkin or horsewhistling with his free hand. During a slow jam about a fair-haired bride, exhausted, they slump over a plate of fresh fruit and another glass of rakı. Lovers canoodle and singles yearn to, as the electric saz twangs and thrums to the bard’s squinty-eyed lament. It is a traditional night out and a celebration of Anatolian culture that, for many, is just as culturally significant as the kebab.

There is no shortage of Türkü bars around town, but most feel like a no-go zone. The Türkü genre’s natural environment is, seemingly, subterranean and, well, shady. It thrives in the backstreets around Taksim Square in cramped basement spaces that are both forbidding and suffocating, even with Turkey’s new smoking ban in place.

On the other hand, Otantik, located in a lovely, if slightly shabby, historic building on Beyoğlu’s main pedestrian artery, İstiklal Caddesi, occupies a charming room with high ceilings, period accents and a mishmash of Anatolian décor. The attentive staff, led by the charming manager Bilal, allows an outsider in without feeling like an intrepid anthropologist among the locals.

Otantik has a full dinner menu featuring mezes and kebabs, but we suggest coming here after dinner to get your drink on and soak in the Türkü experience. After a couple of duble rakı, you’ll be laughing, crying and waving a napkin in the air like a local.