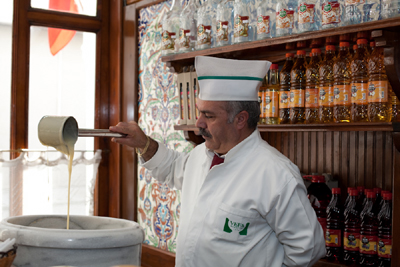 Perhaps better than the taste of the drink is the experience of ordering and consuming it at Vefa Bozacısı, a tavern-like boza outlet where this Ottoman culinary tradition has been protected with a flourish since 1876, when the current owner’s great-grandfather first opened shop. The entire street where the store is located may have been leveled at one point and rebuilt in a “modern” fashion, but Vefa Bozacısı remains carefully preserved, down to the worn marble doorstep and the antique wooden bar. We like to sit in the corner, below the case holding a glass from which Atatürk, the founder of the Turkish Republic, enjoyed a glass of this strange brew (the alcohol content is about one percent), just as sultans must have before him. It’s no wonder that boza appreciation extends beyond the simple act of spooning it out of a glass. An order of boza at Vefa is indeed a cultural experience. And as with other obligatory cultural experiences, say the opera or a visit to a science and industry museum, you are allowed to sigh with relief when your glass of boza has finished.