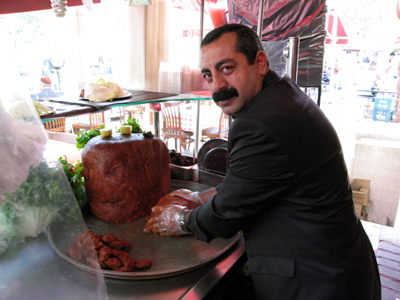 It may not quite be up there with Japan’s fugu, blowfish meat that if prepared incorrectly can lead to death, but Turkey’s çiğ köfte is one of those foods that carries with it a certain frisson of danger. Literally translated as “raw meatballs,” the dish is made out of uncooked beef or lamb that is kneaded together with bulgur, tomato and pepper pastes, herbs and spices and then turned into small, oblong-shaped patties that are rolled up in a piece of crisp lettuce and eaten as appetizers. The taste of the uncooked meat paste, together with the cool lettuce, gives the dish a pleasing freshness.

A kind of Turkish steak tartare, çiğ köfte (the first word is pronounced “chee”) usually draws worried looks from visitors, concerned that ingesting raw meat might end up compromising their holiday plans. We’ve been eating the stuff for years and have yet to experience an adverse reaction, but it would now appear that even Turks are starting to get skittish about eating raw meat. In recent months, we’ve noticed an increasing number of small çiğ köfte restaurants (some of them even part of chains specializing in the dish) open up around town, but almost all of them serving – sacré bleu! – meatless versions of the dish. Those who witnessed the rise of vegetarian chopped liver might understand our concern.

Still, the arrival of any culinary trend cannot be dismissed. So we recently decided to visit two spots, one serving classic çiğ köfte and the other the vegetarian variety, to see how the meatless version stands up to the original.

Our first stop was Sur Ocakbaşı, a grill restaurant serving food from Turkey’s southeast region in the Kadınlar Pazarı, a very pleasant, pedestrian-only square in Istanbul’s Fatih neighborhood. Çiğ köfte is a specialty of the region, and like many restaurants there, the usta (or master) who makes the stuff is accorded a place of honor. In Sur Ocakbaşı’s case, the mustachioed usta has his own glass-lined booth, where he vigorously kneads the stuff. (Being a çiğ köfte maker apparently means being allowed to dress how you want. At Sur Ocakbaşı, the usta was wearing a shiny black suit, the sleeves of his jacket pushed up Miami Vice-style, in order to let him knead the çiğ with greater ease.)

Along with the traditional lettuce wrap, Sur’s köfte came with a side of a dark, fiery pepper paste. It gave the tasty meatballs – which were already flavored with a dark, smoky dried pepper known as isot – a very nice extra kick.

From there, it was on to Limon, a newish meatfree çiğ köfte spot near the Galata Tower that had been highly recommended. Located at the front of a small, triangular building, the charming Limon has only enough room for the usta and a few low stools, with a tiny upstairs floor that has one table and a view of the Golden Horn. Instead of meat, Limon’s usta (also mustachioed) – who hails from Gaziantep, a city in Turkey’s southeast famous for its pistachios – makes his çiğ by kneading bulgur with a mixture of nuts. The end result, served with a flourish on a bed of lettuce with a sprig of parsley, a squeeze of lemon and sprinkle of chopped pistachios, looks and tastes very much like the real thing. The same pleasing freshness is there, the crispness of the lettuce contrasting with the softness of the spiced bulgur-nut paste.

The Verdict? Limon’s meatless çiğ was very good and we highly recommend for those looking for a meatless option. But something was missing. We’re not sure if we could actually make out the absence of the raw meat, but either way, the memory of Sur Ocakbaşı’s çiğ köfte (not to mention the image of the mustachioed usta in his shiny black suit kneading the stuff) stayed with us – for all the right reasons.