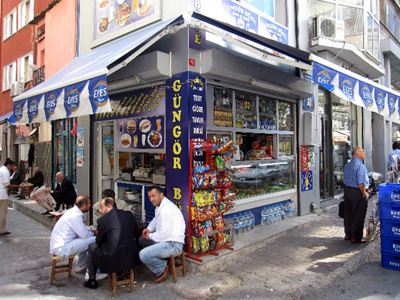 The büfe is a prominent part of the Istanbul streetscape, playing a vital role in the daily life of the city. These are corner stores where you can get a can of beer, a single cigarette, a lotto ticket and, often, a panini-like grilled cheese sandwich. At most büfes, food is an afterthought, but at Güngör, located in the waterfront Karaköy neighborhood, it’s their sandwiches that hold up traffic around lunchtime.

At first glance, Güngör looks like any other corner store, but stoop down to knee height and behold the sandwich-fixing smorgasbord that awaits. Inside a glass-lined cooler facing the sidewalk, little containers crowd for space – one holds a stack of thinly sliced tongue, while another a bright red, chunky eggplant sauce. In another part of the expansive cooler, small glass tubs filled with black olive paste, chopped green olives and an assortment of pickles lie beneath a block of white cow’s milk cheese. The number of combinations of all of the offerings could be accurately calculated, but, to the hungry customer, it seems infinite.

On one recent visit, while scanning the options, a rumbling in the stomach for something Italian-American must have taken control of our order. We went off the menu and customized our own lunch. On a fresh crusty half loaf, the büfe man laid out thin slices of kaşar, a mild white cow’s milk cheese. Over that he stacked a few small strips of freshly fried chicken cutlets (or şinitzel in the local argot), which he topped with a mound of patlıcan soslu, a thick sauce made out of garlicky eggplant, tomato and green pepper. He put the resulting creation into the sandwich press and a minute later handed over what looked and tasted just like a (Turkified) chicken parmesan submarine sandwich.

With the benefit of being freshly assembled, each ingredient remained distinct, the chicken crispy with its breading intact separating the sauce on top from the melted cheese below, which protruded just enough around the edges to seal the hollowed out loaf. Even when eaten standing on the sidewalk, there were no stray tomato sauce splatters aimed at trousers and shoes. It is as if the guys at Güngör evolved the chicken parm sub into a lunch on the go that doesn’t come with a dry-cleaning bill.

There are plenty of other fine sandwiches on offer at Güngör. You can build your own tost, or pressed sandwich, from the many items on display. Alternatively, they grill meatballs (köfte) to order and even have fried liver on the menu (though we didn’t try it, yet). But after such a nostalgia-ridden chicken parmesan à la Turca, we were left hankering for something sweet. A cannoli came to mind, but unfortunately, Güngör is a büfe, so we had to settle for a Snickers bar.