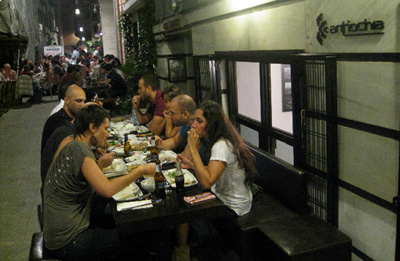 In Istanbul, we’ve noted an inverse relationship between a restaurant’s atmosphere and what’s coming out of the kitchen. In most cases, as furniture design goes slick, as bathrooms get properly lit and ventilated, as the wait staff becomes customer-savvy, the quality of the kitchen inevitably goes down. Presumably, there are those in Istanbul who go out to eat and those who go out to sit in chic restaurants, and never the two shall meet. But just when we thought this theory was watertight, we stumbled upon Antiochia – a small restaurant in Beyoğlu that exudes cool without sacrificing flavor.

From its funky logo to the hipster waiters, Antiochia clearly has a different ambition (and clientele) than most restaurants serving food from Turkey’s southern Hatay region, an area wedged between Syria and the Mediterranean Sea. This place doesn’t have spectacles like lamb flambé [1] on its simple one-page menu, nor is there much haranguing from the waitstaff. A lazy lunch or dinner set to your own pace is quite a relaxing experience and the kitchen is keeping it very real in the Hatay tradition.

Nar ekşili cevizli közbiber, a divine relish of red and green peppers swimming in a pomegranate dressing, was topped with crushed walnuts, adding a crunchy texture to this sweet-and-sour cold starter. Tasting the homemade yogurt with mint proved just how little we knew about what yogurt can be – pleasantly sour, pungent and almost as thick as butter. Muhammara, a thick spread of walnuts, red pepper, spices and pomegranate extract, is a Hatay signature and a fine choice at Antiochia but not our favorite. That award goes to the kekik salatası, an intense meze of green olives, fresh thyme and olive oil. We recommend ordering the mixed meze plate, served with a basket of crisp lavaş chips, which allowed us to sample all seven mezes and save room for the main course.

Like the homemade yogurt – so perfectly yogurty – Antiochia’s main courses are simple, recognizable dishes, set to a higher frequency. Şiş et is a plate of marinated cubes of beef skewered and grilled over a charcoal fire. On any given evening in Beyoğlu, there have got to be thousands of skewers of şiş et coming off the grill, but none are quite as tender and succulent as the version at Antiochia. The minced-meat wrap, an Istanbul street food favorite [2], with onions and tomatoes is among the best we’ve had in the city.

Antiochia’s central location makes up for its shortcomings in the dessert course. Sugary eggplant preserves alongside ice cream just didn’t satisfy the sweet tooth. Instead, we planned an after dinner stop at Cremeria Milano, a fine gelato spot just up the street on İstiklal Caddesi.

Though some find it a bit expensive for lunch, a dinner for two at Antiochia, without alcohol, costs about $35. In our opinion, that’s good value for such ambiance and food. Finally, a place where style doesn’t come at the expense of what’s coming out of the kitchen.