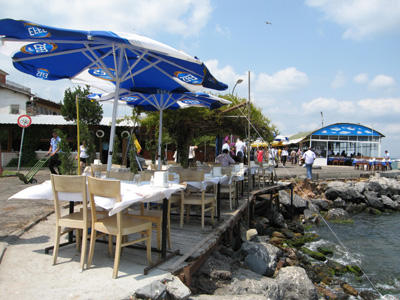 Editor’s note, October 2015: Sadly, we have recently received reports that after a change in ownership at Kıyı, the quality of the food here has gone down significantly.

Although the area around the ferry terminal on Büyükada, the largest of the Princes’ Islands, tends to get unbearably crowded during the summer, we’re still big fans of making the occasional visit to the island. A horse carriage ride past breezy (and blessedly car free) Büyükada’s grand mansions or a walk through its woods are always a good escape when things start getting too hot back in Istanbul.

That said, we’ve always found the dining scene on the island disappointing, mostly aimed at clueless daytrippers rather than serious eaters. Take, for example, the row of busy fish restaurants found just beside Büyükada’s ferry terminal. All have seaside terraces with a view of Istanbul’s rapidly developing Asian shore (and of the occasional piece of urban flotsam and jetsam that drifts by) and similar, predictable menus with decently made, but uninspiring food. What they all do specialize in is serving up equal amounts of hustle and bustle, packing their restaurants with tour groups and as many other visitors that they can lure in off the sidewalk.

On a recent visit to the island, though, we were directed to what proved to be an antidote to all of this: Kıyı Restaurant, a wonderful meze and fish place that puts its competitors to shame.

To get to Kıyı, take a left out of the ferry terminal and walk through the seaside restaurant row until you reach its end. Walk just a few steps more around a bend, and there – like a transgressor who has been banished for (thankfully, in this case) not going with the flow – sits Kıyı. While its rivals have impressively built waterfront terraces, Kıyı’s is a charming, ramshackle affair, shaded by creeping vines and looking like it’s about to topple over into the sea. The restaurant itself seems like little more than a shack, with seven tables and more vines covering the ceiling.

But the biggest difference is in the kitchen. A look at the extensive meze menu reveals some unusual – and very tasty – items, particularly a quartet of extremely fresh salads made with greens and lettuces grown on the island by Kıyı’s owner, Adnan, and a trio of meze made from wild greens that are found in salty marshes near the sea. We were particularly enamored of one called deniz fasulyesi (“sea bean”), a mellow green that looked a bit like rosemary and which was stewed with garlic in olive oil and served cold. Another standout was a ceviche made out of locally caught iskorpit (scorpion fish). Among the hot appetizers, Kıyı also serves the unusual Rum börek (“Greek borek”), a slice of eggplant topped with a spread made out of farmer’s cheese and dill and then fried, something we’ve never seen or tasted before.

The restaurant keeps its fish in a refrigerated glass case at the entrance and has a fairly large – if not obscure – selection every day. On a recent Sunday, along with the levrek (sea bass) and istavrit (mackarel) that you find everywhere else, the case also held a glistening and large mercan (common pandora), a catfish-like kırlangıç (grey gurnard), and something called gülger, which we had never encountered before. Kıyı grills most of its fish, but we were pulled by the barbunya (red mullet), which are served fried in a light dusting of flour. Most of the fish average around 20 lira ($13) per serving.

Of course, the most appealing catch of all may be Kıyı itself. We will certainly be going back to this island shack.