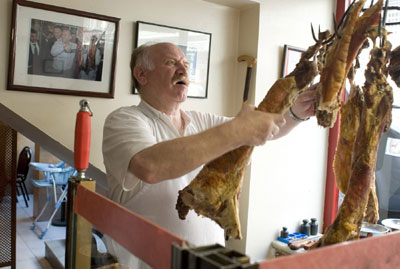 Editor’s note: This post has been updated to reflect the fact that the restaurant has changed locations. The food remains as good as ever.

The Kadınlar Pazarı – a very pleasant, pedestrian-only square in Istanbul’s Fatih neighborhood – is the closest the city has to having a “Little Kurdistan.” The surrounding area is populated by migrants from Turkey’s predominantly Kurdish Southeast region, and small markets and butcher shops selling honey, cheeses, spices and other goodies from the region surround the square. Visiting the atmospheric area is certainly a good way to get a taste of Turkey’s east without having to leave Istanbul.

The square is also home to numerous restaurants, most of them selling büryan kebabı and perde pilavı, two dishes that are a specialty of Siirt, a city not far from Turkey’s Syrian and Iraqi borders that’s home to both Kurds and Arabs. Büryan is a bit like Turkey’s version of Texas pit BBQ. To make it, a side of a small lamb is slowly cooked over coals in a deep hole in the ground, resulting in exceptionally tender meat covered in a thin layer of fat that has turned crackling crunchy. For perde (the word means “curtain” in Turkish), a fragrant and peppery pilaf made of rice, chicken, almonds and currants is wrapped in a thin pastry shell and then baked inside a cup-shaped mold until the exterior turns golden and flaky. Both dishes, when done right, are the kind of food that leaves you thinking about it fondly for days – even weeks – after you’ve eaten it.

We are big fans of sitting down for a meal at the breezy outdoor space of one of the restaurants on Kadınlar Pazarı, where we were recently directed to Siirt Şeref Büryan Kebap Salonu, a büryan and perde joint right on the square that left us begging for more. Originally from Siirt, the restaurant’s proprietors (who claim to have been in the pit cooking business since 1892) keep things simple: take meat, cook it in a pit, serve it for lunch. “Cooking in the pit makes the lamb tastier,” says owner Levent Avcı. “It doesn’t need any spices or anything else to make büryan taste good.”

At the front of the restaurant, an usta working at a marble counter carefully watches over an assortment of cooked sides of lamb hanging off a hook. When an order is made, he slices off a hunk of tender meat, cutting it into small cubes that he places on a round flatbread, sprinkling it with a touch of salt. The meat and flatbread (which soaks up the fat) are then rushed to a nearby wood-burning oven to be quickly warmed up.

The perde pilavı, meanwhile, emerges oven-fresh from somewhere in the back of the restaurant, its flaky pastry shell not so thick that it overwhelms the rice and chicken mixture inside, but not so thin that it doesn’t have any crunch. When you cut through the pilaf’s shell, a cloud of aromatic steam rises upwards and lodges in your brain as a nagging memory. As with büryan, the only way to deal with that nagging memory is to come back for more – frequently.