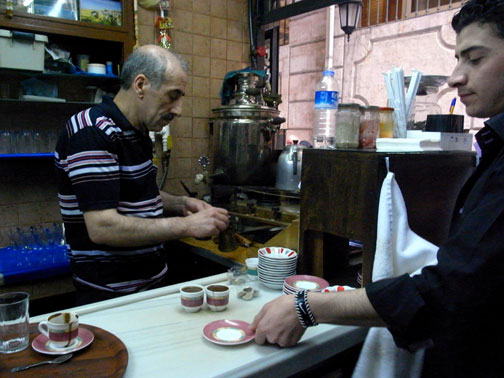 It’s a dirty secret nobody wants to talk about, but let’s put it out there: finding a good cup of Turkish coffee in Turkey can sometimes be very difficult. Thin and watery, rather than thick and viscous, is frequently the order of the day. This is no small matter, akin to complaining about the quality of the French toast in France or about finding stale danishes in Denmark. Turkey, after all, is the land that, during Ottoman times, helped introduce coffee to the rest of Europe. When it comes to making Turkish coffee, Turkey needs to represent.

One person who clearly understands this is Cemil Pilik, brewmaster for the last 17 years over at Mandabatmaz, a tiny café off İstiklal Caddesi that makes one of Istanbul’s finest cups of Turkish coffee. The stuff Pilik serves lives up to what Turkish coffee should be – and it better be, since the café’s name roughly translates into “so thick even a water buffalo wouldn’t sink in it.”

On a recent afternoon, Pilik was busy making cup after cup of his excellent brew, thick to the point of almost being chocolaty, each demitasse holding only a few sips worth of strong coffee before you hit a rich deposit of dark brown grounds. “Not everybody can do this,” Pilik says, as he holds a well-worn copper coffee pot to a blue gas flame that shoots out like a jet from a small, two-burner range. “It’s all in the hand,” he adds, making a twisting motion with his wrist. “The hand is very important.”

As is the coffee. Mandabatmaz’s comes freshly roasted and ground every day, arriving in unmarked, clear plastic bags. “It’s roasted just for us,” Pilik says, opening up a bag of coffee to let us take a sniff of its aroma. “It’s not commercially packaged.”

Along with Turkish coffee, Mandabatmaz also serves freshly made tea (which gets very good reviews). The café itself, located on a quiet alleyway, is barely large enough to hold Pilik, the marble counter he works behind and a giant, silver samovar that dispenses hot water for the coffee and tea. Most customers end up sitting outside, on one of the dozens of small stools that line the alleyway, some chatting happily with friends, others silently drinking Pilik’s coffee, as if it were a kind of elixir.

Around the corner from Mandabatmaz is a Starbucks, one of the three that can be found on İstiklal, but it’s not really proving to be a competitor. Yes, you can sip a latte there while sitting on a cushioned lounge chair, but that’s something you can do in countless places across the globe. A cup of Cemil Pilik’s Turkish coffee? There’s only one place in the world where you can get that.

Address: Olivia Geçidi 1/A, Beyoğlu (near St. Antoine Cathedral on İstiklal; look for Barcelona Patisserie on the corner)
Telephone: No phone