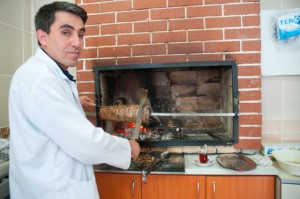 Editor’s note: Unfortunately, we recently discovered that this place has closed down, the kebab maker having returned to his former job as an electrician. In the meantime, you can try cağ kebabı at a place called Şehzade Erzurum Cağ Kebabı [1], which is near Kasap Osman [2] on Hocapaşa Sokak in Sirkeci.

If the eastern Anatolian province of Erzurum had an official symbol, it would surely be cağ kebabı, which looks like a horizontal döner, but tastes otherworldly. And if South American cowboys somehow found themselves in Erzurum’s grassy Turkish steppe, they would surely be struck down with déjà vu at the sight of this carnivores’ fantasy, turning slowly over a hardwood fire. The way we see it, cağ kebabı is the Turkish equivalent of Argentina’s asado or the Brazilian churrasco, right down to the special utensils and no-foreplay meat eating. And the ordering process is made simple for meat lovers: just grunt and flash a few fingers for the number of skewers you intend to eat. Two or three are enough for most, but a real high-plains drifter might need two hands to order.

Though ubiquitous in Erzurum, cağ kebabı restaurants are disappointingly few in Istanbul. We get our fix at Erzurum Cağ Kebapçısı, on Karaköy’s Mumhane Caddesi, one of the great dining streets of the city. With a killer tantuni shack [3] and one of Istanbul’s best baklava stops [4], choosing where to eat on this street can be tough, but it’s hard to resist the meaty temptation of cağ kebabı.

Once you sit down at one of the four tables at Erzurum Cağ Kebapçısı, within whiffing distance of the spit, you’ll know you’ve made the right decision. That smell comes from the best cuts of lamb expertly marinated and then slowly cooked over an oak fire on a rotating, horizontal spit. As it slowly turns, the meat continuously bastes itself, occasionally flaring up with a sizzle and a pop that chars an outlying corner of meat.

Cağ is not to be confused with döner. Notice the tender care with which the usta handles the spit. Whereas a dönerci saws and hacks like a lumberjack from his vertical spit, leaving the meat he has cut off lying in a puddle of grease, our cağ man carefully selects each morsel of meat from the spit with a sharp knife and a small, thin skewer. When he’s done he’ll present you with a precious collection of tender yet crispy bites on that skewer – more the work of a jeweler than a kebabçı.