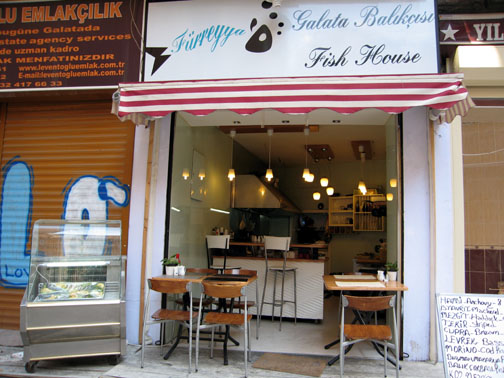 From the outside, Fürreyya Galata Balıkçısı, a tiny new restaurant in Beyoğlu’s quaint Galata area, doesn’t look like much. Two tables, two stools at a short counter, a smoky grill and not much else. But inside this modest fish shack beats the heart of a more ambitious place. The friendly husband and wife team who own the place and share kitchen duties used to run a restaurant in Istanbul’s upscale Bebek neighborhood, and it’s clear that Fürreyya is in experienced hands.

But the menu also holds some very rewarding surprises. Balık köftesi are delicious fish cakes cooked over the charcoal grill and served with a squeeze of homemade basil aioli. On occasion, Fürreyya serves up its tasty take on mantı, tortellini-like miniature pockets of dough that are usually filled with ground meat but here are made with fish. The highlight of the menu, though, may be its most humble offering: the balık dürüm, a tortilla-like wrap filled with grilled fish and caramelized onions. At 4 lira for a dürüm, it’s one of Istanbul’s best and tastiest deals.

Fürreyya’s owners have plans to expand their restaurant, but for now they are making do with their tiny space, saying it allows them to focus on quality. If the restaurant is full, they will happily take your order and wrap it up to go. From there you can take your food and eat it in the pleasant square that lies in the shadow of the nearby Galata Tower, where you can sit down on a bench and enjoy your lucky catch.