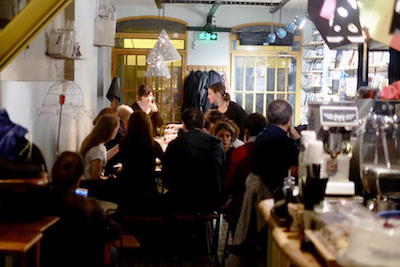 A café at its best is so much more than the sum of its parts: it’s a place where people can easily mingle, share ideas, and dertleşmek, or commiserate over their troubles, all while imbibing caffeine. At the same time, it’s a place where visitors might feel an invisible thread of common beliefs connecting them, an unspoken camaraderie, even if they don’t socialize with anyone.

This community spirit runs strong in Dose & Istos Café, a new Rum (pronounced “room,” the name given to Turks of Greek descent) café in the heart of Beyoğlu. When we first went one rainy Sunday evening on a tip from a friend, we didn’t remember the exact address, just general directions that it was off Istiklal Street, near Galatasaray Lycée. We turned a corner, then another, and yet another, walking downhill until the sound of Greek being spoken by a couple sitting outside told us we’d arrived. Ahead of us, hanging over the entrance, we saw a wooden sign: Istos.

Read the rest of the review on Culinary Backstreets [1].