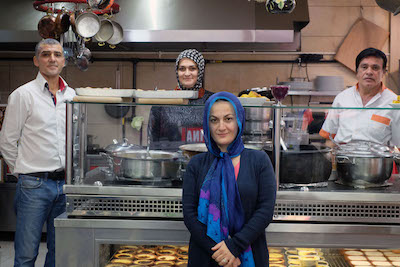 Everyone seems to feel at ease in Emice’nin Yeri. It’s the kind of place where workers come after their shifts, families and couples dine, single men drink their tea and watch football matches on the TV, and women too are comfortable eating alone. It’s not just a welcoming place – Emice’nin Yeri also happens to be one of the best Black Sea restaurants around.

The emice part of the name comes from the Laz language and means “uncle,” or amca in Turkish, so can be translated to “Uncle’s Place,” a fitting moniker for the restaurant does have a certain avuncular charm. There are the wooden hamsi, which were hanging from the ceiling when we first started coming here (although they disappeared after a new ceiling was put in), a collection of toy cars, pictures of bucolic Black Sea towns, flags of regional favorite Çaykur Rizespor Football Club on the walls, and gourds hanging in the kitchen – all create a homey feel. Yet the modest, eclectic setting doesn’t quite let on how good the food is.