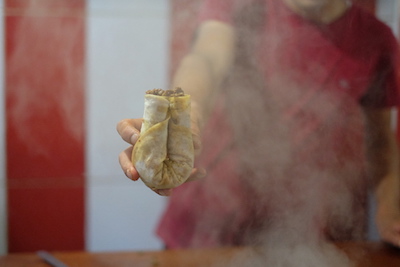 We boarded a train in Turkey’s kebab capital of Adana and headed an hour west to the calm, palm tree-lined coastal city of Mersin with one thing on our minds: tantuni. While available at a number of recommendable establishments in Istanbul [1] and other Turkish cities, tantuni in Mersin exists on a different plane of existence, one buttressed by endless plates of salad, peppers and meze and its prized status as the city’s flagship food.

Tantuni is frequently billed as the Turkish equivalent of a taco, and while this comparison is not altogether unwarranted, we think it is primarily invoked by those with a particularly fierce longing for Mexican food. We believe tantuni should be evaluated on its own merits, which stand proud and tall. Sumptuous bits of beef steak are fried with a splash of cottonseed oil inside a vast, shallow metal pan known as a sac. The cooked meat is then dusted with spices, and dotted with chopped tomatoes, parsley and onion before being rolled up in a soft, fresh slice of lavaş flatbread. While we regularly enjoy it in Istanbul, we had to go to the source.