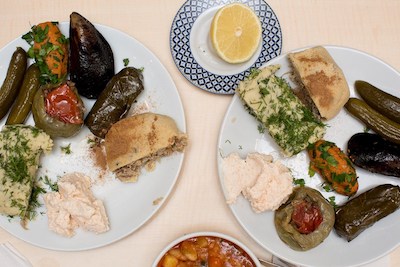 On a late spring afternoon I sat at the only table at Tadal, an Armenian deli in Kurtuluş. Behind me were shelves lined with imported liquors: French, Greek and Georgian wines, Russian vodkas, an admirable range of Scotch whiskies.

Opposite, a refrigerated case groaned with mezes (lakerda and taramasalata, rice-filled sweet red pepper dolma and mercimek koftesi, anchovies in olive oil), many varieties of olives and a range of cured meats that included not only the ubiquitous çemen-coated beef pastırma but also pork-based specimens like mortadella and salami. Cheeses were arranged next to tubs of pickles and clay dishes of buffalo-milk yogurt. Shelved behind the case were mini-loaves, for sandwiches to go, European and American brands of spreads and relishes, and an admirable selection of olive oils and vinegars.

Read the rest of Robyn Eckhardt’s review of Tadal and her recipe for topik at Culinary Backstreets [1].