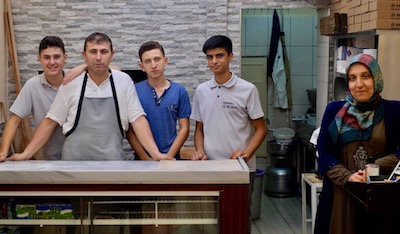 The tiny Öz Develi Etli Pide Salonu is nestled in a narrow backstreet in Istanbul’s Tarlabaşı neighborhood, a place that is much more synonymous with crime, gentrification and crass urban development (in that order) than it is with regional culinary specialties.

But Öz Develi’s speciality, the cıvıklı pide, is so enticing that it attracts diners from all over the city to this unfairly maligned neighborhood, which is neither without its problems nor lacking in treasures. The master behind the cıvıklı is Hacı Ahmet Beşparmark, who hails from the district of Develi, south of Mount Erciyes in the Central Anatolian province of Kayseri. As true an usta (or master) as they come, Beşparmark set up shop in Tarlabaşı in the early 1990s and has been elbow-deep in flour ever since.