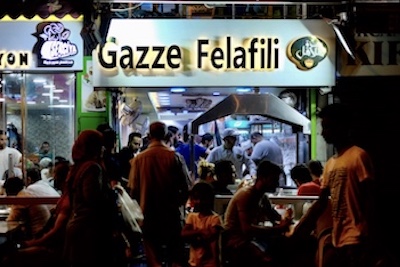 The assumption that falafel is a Turkish staple is a misunderstanding of global proportions. Perhaps this mix-up is due to its appearance on the menu of what seems like every Turkish restaurant outside of the country. Yet for years falafel has been largely absent from Turkey.

We have often pondered why this was the case: The chickpea is a fundamental ingredient in Turkish cooking, after all. And hummus has made its way from the southern province of Hatay – which shares a border and culinary traditions with Syria – to the meyhanes of Istanbul and Izmir. But for whatever reason, falafel never made the jump; it used to be very difficult to find proper falafel in Turkey, although it remained popular over the border in Syria.

Read the rest of the feature at Culinary Backstreets [1].