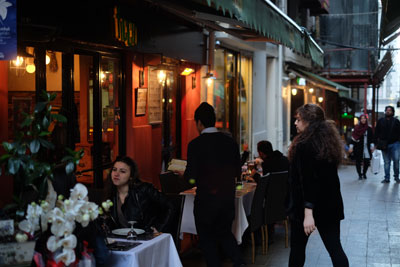 When Leyla Kılıç Karakaynak opened up a tiny restaurant on Kallavi Street in Istanbul’s Beyoğlu district in 1996, she couldn’t have predicted that she would end up practically running the whole street.

That small restaurant, Fıccın, is now spread across six buildings on the same block-long  pedestrian-only street and has become an Istanbul institution. The restaurant shares its name with its signature dish, a meat-filled savory pastry that is among the Circassian specialties on the menu. Karakaynak’s family hails from North Ossetia, and while Fıccın serves up a number of classic Turkish staples, it’s the regional dishes that you can’t miss, including Çerkez tavuğu, a simple yet sumptous paste of shredded chicken and walnuts, and Çerkes mantısı, comforting, pillowy dumplings served under yogurt.

Kallavi Street on a nice Friday evening is teeming with guests sitting indoors and streetside in Fıccın’s string of restaurants, though the vibe of the narrow alleyway was entirely different when Karakaynak first set up shop 20 years ago.