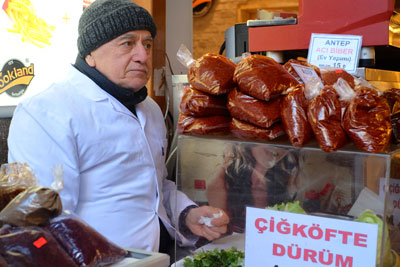 Visitors to Istanbul’s iconic Spice Bazaar encounter a place packed wall-to-wall with overzealous shopkeepers selling everything from saffron to sumac assembled in rows of majestic pyramids at slightly inflated prices.

But for our money, the only spices worth a damn are found just outside in a humbler setting. Crammed behind a tiny kiosk perched in front of a fast-food restaurant that flanks one of the bazaar’s entrances is the endearing Orhan usta. The loveable 65-year-old is a veritable master of çig köfte and a connoisseur of the spicy red pepper flakes cultivated in his hometown of Gaziantep, the southeastern city considered by many to be Turkey’s culinary capital.

While it’s traditionally made of raw meat (çig köfte translates to “raw meatball”), the versions found around Istanbul are typically vegetarian, a mix of bulgur wheat, tomato paste, pureed potato and, in Orhan usta’s version, a healthy dose of fiery Antep red pepper.