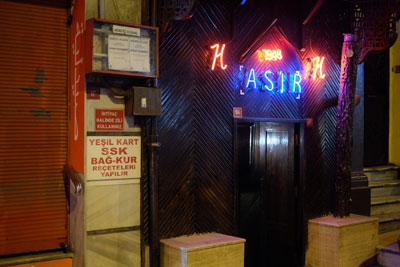 On our way to dinner one Friday evening, we hopped in a cab headed for Tarlabaşı, a rather infamous neighborhood in the dead center of Istanbul in which many people still refuse to set foot.

The area was a longtime hotbed of Greek and Armenian artisans and tradesmen, once the backbone of Ottoman-era Istanbul’s commercial life, who erected rows of gorgeous European-style apartment buildings beginning in the 19th century. Many stand proudly today, while dozens of others are fenced off and awaiting renovation as part of an invasive gentrification project that seeks to remodel the now decrepit, impoverished Tarlabaşı.

By the end of 1970s, Tarlabaşı’s Greeks and Armenians had packed up and left the neighborhood and the country, following difficult decades of anti-minority policies and attacks. In their place came a motley crew of other disenfranchised people: Kurds fleeing conflict in the southeast of the country, Roma living on the fringes of society, transgender sex workers, economic migrants and political refugees.