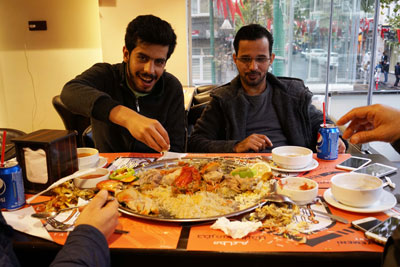 Having popped up rapidly amid the waves of Syrians fleeing the devastating civil war that has displaced more than half the country’s population, these establishments have made a firm imprint on the culinary scene. While the falafel at many of these places is a mediocre afterthought overshadowed by the more popular poultry-based items, we found one counter offering falafel and falafel only, serving up a generously crafted sandwich the size of a chubby child’s forearm for a measly TL 2.50 (US$0.75). The plump spheres of mashed chickpeas and spices were fried to order and laced with hummus and a hot red pepper sauce. We were astonished at how long we stayed full on mere pocket change.