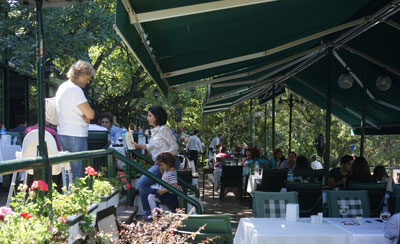 Located just beneath Istanbul’s first Bosphorus Bridge in the Anatolian side district of Üsküdar is a secluded slice of Trabzon, the Black Sea province known for its otherworldly lush green forests, hot-tempered inhabitants and distinctly deep cuisine.

The Trabzon Kültür Derneği (Trabzon Cultural Association) is something of a clubhouse for folks who grew up in the province and later moved to Istanbul for school and work. Founded in 1970 and having changed locations a number of times, the association set up shop in Üsküdar’s Beylerbeyi neighborhood at the turn of the millennium and crafted a miniature version of home in the heart of Turkey’s largest, ever-sprawling city.

Nestled between thick patches of trees and greenery on all sides and featuring an aging wooden treehouse transported all the way from the northeastern province, the association offers traditional music and dancing courses and also boasts a full-service restaurant that whips up excellent renditions of revered Black Sea dishes.