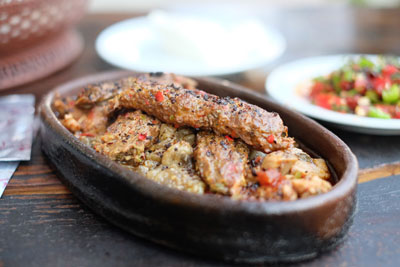 We got hungry after doing some serious exploration in the Asian-side neighborhood of Mustafa Kemal, a hotbed for left-wing groups and a melange of informally built homes in the shadow of the rapidly developing district of Ataşehir. Passing by a string of uninspiring döner and pide joints, we inevitably opted to do what works best: follow our noses.

The ragtag quarter is better known as 1 Mayıs, taking its moniker from a bloody, chaotic scuffle in Taksim Square on May Day, 1977, that left over 30 dead. Home to a working-class Alevi population of Central and Eastern Anatolian migrants who came to Istanbul in the 70s, the neighborhood is tagged on every other wall with the acronyms of leftist groups (legal and illegal alike) alongside posters of martyred revolutionaries. These kinds of neighborhoods typically attract heavy police attention, and 1 Mayıs is no exception. A freshly painted police station stands imposingly in the dead center of the main street.