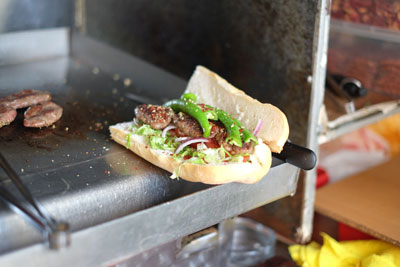 The triangle of Kurtuluş, Feriköy and Bomonti represents an Istanbul on the verge of fading away. Though still inhabited by significant numbers of Greeks, Jews and Armenians, there are more local churches and synagogues than are used by the remnants of those diminished communities. The numerous schools, houses of worship and cemeteries are relics testifying to the cosmopolitanism that once defined this segment of inner Istanbul.

Another nostalgic quality of the area is its small-business culture, still thriving, yet on the verge of a major shift. Though there are many long-standing cake shops, butchers and meze delis, the gentrification triumvirate of artisanal pizza, craft burgers and third-wave coffee has come a-knocking, particularly in Bomonti, where the old beer factory (the neighborhood’s namesake) was recently revamped into the latest incarnation of the acclaimed concert hall Babylon. The gorgeous, glimmering venue and the numerous skyscrapers that lurk in the background foreshadow the inevitable creeping transformation of Kurtuluş and Feriköy, both home to middle-class quarters and poorer, run-down enclaves.