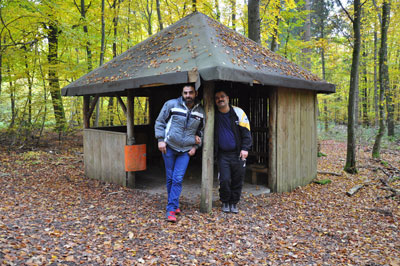 Rashed wandered aimlessly in the dark, autumn leaves and twigs crunching under him with each step. Apart from the light from his Samsung, the scene around him was pitch black. “I just need to get signal so they can send me a recording of Lulu’s voice,” he said, hopeful but frustrated.

Lulu is his beloved two-year old niece – the one who almost convinced him to stay in Istanbul when he squeezed her goodbye. It was the last time they touched before he left his family behind to embark on the harrowing three-week journey to Germany.

“‘Don’t go, don’t go, please don’t go,’ she kept crying,” he recalled. Rashed’s never been married and has no kids of his own. Lulu is his “soul” – the most important thing in his life.

“I just picked her up and held her,” he said. “I was sobbing too. It was the hardest thing I’ve ever had to do.”