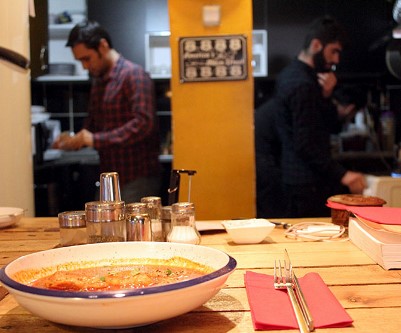 My wife, Kurdish in-laws and I are enjoying an early meal at Gabo, one of Diyarbakır’s most successful new restaurants. It gets dark early this time of year in the city, and the dry air carries the ayaz chill, which engenders a need for a hearty soup and hot tea. The owner, Cahit Şahin, shares stories of the place’s beginnings. “When we applied for a restaurant license, City Hall just laughed,” he tells us. “‘For a vegetarian place?’ they said, ‘In Diyarbakır? Go ahead! It doesn’t matter if we grant you one or not. You’ll go under in three months!’”

But that was nine months ago. Gabo, which bills itself as the predominantly Kurdish southeast region’s only vegetarian restaurant, is thriving. In fact, they are doing so well that Şahin and his fellow owners are planning to open franchises in the western Turkish city of Tekirdağ and in Istanbul. As Şahin talks, he gestures at the bustling café around him. “We used to work as tutors for students preparing for their standardized exams. We were just sick of the rat race, of always being tired and worn out. I envisioned a cozy alternative joint where I could drink tea, listen to jazz and play backgammon with my friends.” He laughs. “We haven’t touched a backgammon board since we opened the doors!”