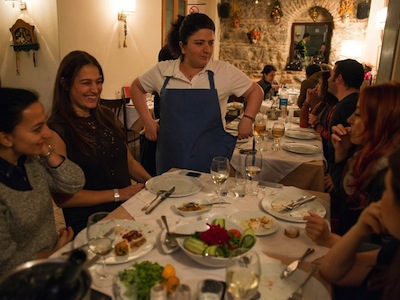 [1]
In the great multicultural Anatolian kitchen, questions about the ethnic or national origins of foods are often cause for forks and knives to fly. A porridge called keşkek [2] is a hot-button diplomatic issue between Turkey and Armenia, and we won’t even get started on the ongoing baklava debate [3]. So what to make of this cuisine that draws influences from every corner of the former Ottoman lands, a territory stretching from the Balkans to North Africa? The answer might be in a simple term that’s becoming popular among Turkey’s minorities. The word Türkiyeli means “of Turkey” and differs significantly (and quite intentionally) from the word Türk, which often adds ethno-religious shades to nationality.

We find Türkiyeli to be an apt description of most things in this country, and certainly of the restaurant Mari, whose heritage is anything but simple: owned by Armenian and Jewish business partners, the venue is frequented by a diverse clientele that includes many Istanbul Armenians. Nevertheless, Mari wears its identity loosely and is not trying to be anything but a good restaurant with a kitchen turning out well-made, traditional favorites. Hold the culinary nationalism, and dig in.

Read the rest of the update review on Culinary Backstreets [4].