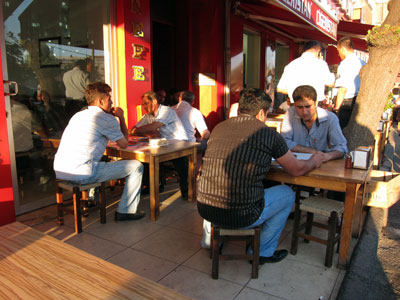 Editor’s note: In the latest installment of our ongoing series First Stop, we asked Stavriani Zervakakou, chef of the restaurant Karaköy Gümrük in Istanbul, where she stops first for food when she returns to Istanbul. (We’ve written previously about her First Stop in Athens [2].)

Lamb liver skewers in the Aksaray district’s Horhor neighborhood; domatesli kebap with wheat pilaf behind the Egyptian spice market in Eminönü; fish and bread from Emin Usta [3] in Karaköy; a simple but delicious pressed sandwich with kavurma – beef rendered in its own fat – and kaşar cheese from Petek near the Galata Tower; or a postmodern kumru [4] from 6/24 in Nişantaşı would be my top list for a first welcoming bite in Istanbul.

The time of landing and my mood determine my final pick as a first stop, and when I feel adventurous I definitely go to Horhor! I love this area because the restaurants here are open until very late and the atmosphere of Horhor is just like its name: strange and surreal. You have to see the neighborhood for yourself. I usually have a seat at Çiğeristan, a local standby whose name means “the land of liver.” I know the name might sound strange but the food here tastes so good.

Read the rest of the story at Culinary Backstreets [5].