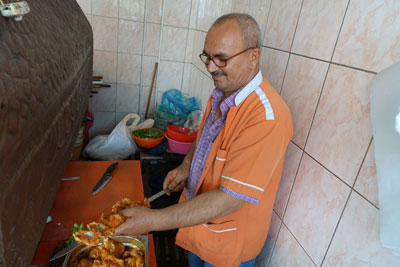 In many parts of Istanbul, it’s not unusual to reside amidst industry in progress. It could be a workshop in your building’s basement where fire extinguishers are refilled, a copper pot re-tinning enterprise just outside your front door or a knockoff Fendi purse assembly line you catch a surprising glimpse of as you look across the breezeway into an adjacent building. Despite zoning laws, the age-old tradition of living alongside the clang of the forge and the whir of heavy instruments is still a reality in Istanbul. And as hard as it may be to weed out all of these workshops, efforts over the past 40 years to do so are not without results.

One of the holdouts is the neighborhood of Topçular, a designated industrial zone in the Eyüp district, just outside of the old city walls. Its main street is filled with restaurants, offices and apartment buildings, like much of the city. In the backstreets, though, are large blocks resembling factories, or rather hives of tiny factories, bundled together in the same building – modern-day versions of the Ottoman-era han found throughout Istanbul’s old city. Located at the intersection of the E5 highway, which you can take directly over the Bosphorus to the Asian side of Istanbul or out toward Bulgaria in the other direction, Topçular may not be pretty, but it sits in a very desirable location.