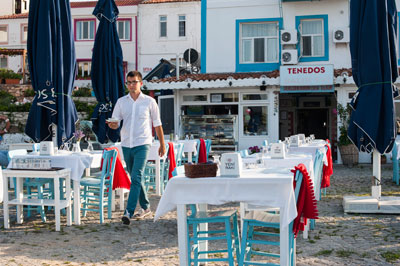 Forty-five minutes south of Çannakale, a small but flourishing ferry port sits outside of the town of Geyikli. Nestled between olive groves and farms lies the main access point to the small island of Bozcaada. Until the late 1990s, Bozcaada was disputed territory between Turkey and Greece, isolating the island from foreign vacationers. As a result, the vine-covered passageways of the traditional seaside village have been preserved. Active resistance from island residents prevents large developments from being established and restricts the use of cars within the island’s main town. Consequently, Bozcaada is a haven for those seeking delicious food away from sprawling resorts and crowded beaches.

As the ferry lumbered closer to the island, we saw the outlines of hulking castle walls shadowing a harbor. Brightly colored wooden fishing boats rocked in their moorings in front of whitewashed seafood restaurants. At the southwestern corner of the port, backed by the grassy hill outlining the edge of town, sat Tenedos. The blue chairs were the color of the late morning sky. The simple sandwich board perched at the top of a garden path guided us to the waterfront with promises of the daily mezes.