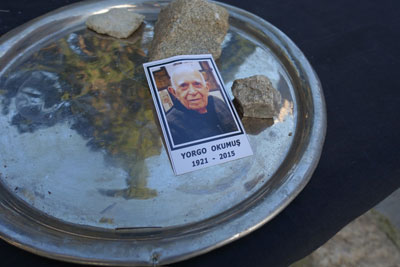 On any given night, bustling, narrow Nevizade Street in the heart of Istanbul’s Beyoğlu district buzzes with thick crowds of evening revelers searching for the best table while clean-shaven waiters in their customary uniform of pressed white shirts and V-neck sweaters attempt to lure the crowds into their establishments. Hyperactive as it may be, Nevizade – a hub for the meyhane, the Turkish taverna where plates of meze are enjoyed alongside slowly sipped rakı and grilled fish – has for decades had one distinctive, constant presence: Yorgo Okumuş, co-owner of the meyhane Krepen’deki İmroz and sole owner of a pair of almost comically bushy white eyebrows and an enigmatic mien that seemed to say he’s seen it all (which he probably had).

This week, sadly, Nevizade lost its elder statesman, with Yorgo Baba (as he was affectionately known) dying at the age of 94 after a short period of bad health. With the passing of Yorgo Baba, a member of Istanbul’s dwindling Greek community, Beyoğlu lost one of the living links to its once vibrant multicultural and cosmopolitan past. At the same time, with his meyhane, Yorgo leaves behind an Istanbul institution that itself serves as a link to that past and that tells the incredible story of the fall and rise of the Beyoğlu neighborhood and its nightlife and dining scenes.