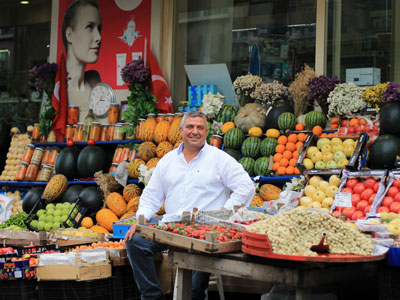 Stretching 25 feet alongside a pharmacy in the heart of Istanbul’s Şişli district, just a three-minute stroll from Osmanbey metro station (Pangaltı exit), lies Uğur’s fruit and vegetable stand. Day in and day out, come rain or shine, Uğur sits and smiles, utterly engulfed by the fruits and vegetables he sells. Hundreds of people stop by his stand every day: family, old childhood friends, local politicians, tourists. He asks them simply what they need and gracefully bags and weighs the produce on an old scale before placing it gently in their hands. He’s more than just a manav, or greengrocer; he’s an uncle for the local children passing by, a walking, talking cookbook, a neighborhood encyclopedia, a walk-by shrink. He and his brothers are part and parcel of daily life in Istanbul, flag-bearers of food tradition from days of Ottoman old.

Overflowing with produce, Uğur’s teeming stand is a succulent sight to behold, a produce eater’s paradise. Among the vibrant mosaic of fruits and vegetables are mottled anjelika plums of dark wine and coral, miniature pears from Izmir, speckled and striped pepino (otherwise known as sweet cucumber) and even glass jars of homemade zeytinyağlı kudret narı, a mixture of Indian bitter melon and olive oil that has medicinal properties, such as treating stomach ailments. Flowers and herbs adorn the stand and a sky-blue hand-held radio plays songs of Cem Karaca and other classic Turkish artists.