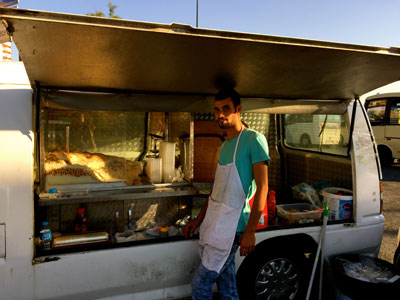 The Yenibosna bus station sits at the intersection of numerous transit routes, where passengers can embark on journeys to the furthest corners of the city as well as to its beating heart.

Close to Istanbul’s main airport, and wedged in beneath several high-rise towers that seem to have ascended from the ground overnight, the bus station sits adjacent to a major metro line and below the main E-5 highway, with the grubby, crowded neighborhood of Yenibosna to the north.

As thousands of people crisscross through the terminal daily, naturally there are a handful of places to grab a quick bite. And in keeping with the theme of transit, the top culinary delights of the drab station happen to be sold out of the back of vehicles.

Brothers Kamuran and İbo sell small plastic containers of delicious butter-laden rice topped with chicken and chickpeas directly out of a Mitsubishi minivan to hungry passengers and drivers alike. These brothers – who hail from the southern province of Adana, better known for its kebab – are seasoned veterans, as they have been making and selling rice since they were children, a profession inherited from their father. “I’ve been doing this for 13 years, and I’m 20 years old,” İbo said.