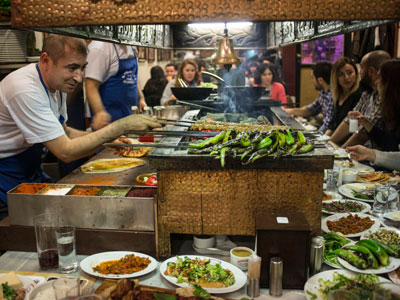 If Istanbul had a city museum, in the 20th-century exhibition we’d expect to walk into a life-sized recreation of Kenan Usta Ocakbaşı, a seminal grill joint in the Beyoğlu district. As visitors descended a few steps into the exhibition, sensors would trigger the harsh light of fluorescent bulbs overhead, illuminating a room covered in photographs of husky men with mustaches posing with a stout man in an apron, grill master Kenan Usta. The somber, groaning warble of the great Arabesque singer Müslüm Gürses [2] would cue up in the visitors’ rented headsets and ducts inside the replica grill would belch out smoke scented authentically by grilled meat. Arrows on the floor would encourage visitors to sit down at one of the seats surrounding the large grill in the center of the room, across from a skewer-wielding rendering of Kenan Usta himself. As the earphones filled with Kenan’s voice telling his own story of migrating from an Anatolian village to Istanbul as a boy and the hard-won modest success of this outsider – one that is as significant to contemporary Istanbul as the Hagia Sophia is to the skyline – the visitor to this exhibition would start to feel a mixture of pleasure and pain, amplified by an anise-scented sedative chemical released from the ducts.