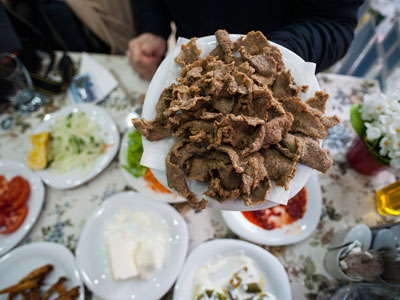 The city of Edirne sits on the borders of Bulgaria and Greece in the far northwestern and European portion of Turkey. Once the capital of the Ottoman Empire, Edirne has been occupied for thousands of years, dating back to the Romans and Thracians before them. While no longer the seat of an empire, Edirne could still be considered a culinary capital for tava ciğer, or fried liver. Two things are constant companions to travelers venturing into Edirne: glistening portraits of famous oiled-up wrestlers (a big annual contest is held nearby) and innumerable small restaurant fronts featuring a vat of boiling sunflower oil. The aroma of meat cooking in these vats is distinctive and primal, instantly activating salivary glands or rumbling stomachs.

It’s 9AM. Morning light glints off of the swelling banks of the Meriç and Tunca rivers, reflecting off simitçi carts luring in their daily customers. We are enjoying our second cup of tea with İlhan Usta, one of the proprietors of Meşhur Edirne Ciğercisi, while waiting for the liver man to arrive from Bursa. The screech of brakes and a clattering on cobblestones herald the arrival of a sleepy-eyed but jovial man in a royal-blue sweatshirt and plain white van. Swinging on hooks in the back are gaggles of juicy red livers from young bulls.

Read the rest of this feature at Culinary Backstreets [2].