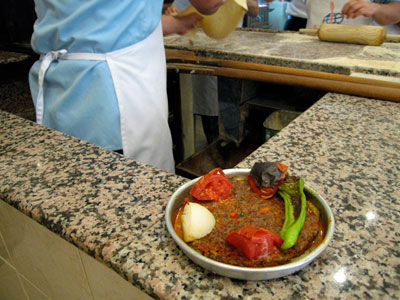 In Turkish popular lore, the residents of Kilis, a town in Southeast Turkey near the Syrian border, are known for two things: kebab-making and smuggling. We haven’t been to Kilis, so we can’t vouch for the smuggling bit (although these days the town is featured regularly in the headlines as a hub for fighters being hustled across the border into Syria). But based on the food we’ve tried at Öz Kilis, a wonderful little spot on a quiet backstreet in Fatih run by two Kilis natives, we can report that the kebab-making reputation is well-deserved.

Not just any kebab, mind you. Clearly an unorthodox and clever lot, the people of Kilis have a distinctly different approach to cooking meat. While a wide swath of humanity stretching from the Balkans to the Hindu Kush make their kebabs by putting meat on a skewer and cooking it over a fire, the people of Kilis are famous for their “pan kebab,” a thin disc of ground meat that is cooked in a shallow metal dish that’s put in the oven. It’s a kind of Turkish meatloaf – only juicier, spicier and, well, better than any other meatloaf we’ve ever had.