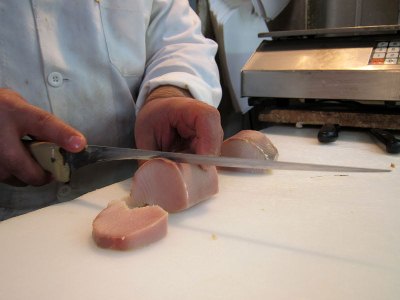 [1]
The fatty torik – the Turkish name for a large, mature Atlantic bonito, similar to the little tunny – courses the straits of the Bosphorus and the Dardanelles for just a short period each year in November and December. Yet the people of Istanbul eat it year-round by preserving the fish in a light brine, something it seems they have been doing for millennia – the Byzantines even minted coins with an image of the fish. Making lakerda is more than a means to preserve bonito for the rest of the year, however; it’s part of the city’s culinary instinct.

Around 5 a.m. one recent morning in Yenikapı, yellow rubber boots were piled high in front of the one serene spot on the sprawling grounds of the Municipal Fish Auction. Inside the “Fisherman’s Mosque,” 70 or 80 men were saying their prayers after a long frenzy on the Bosphorus. These fishermen had brought in the winter’s first haul of torik – the season’s most valuable catch.

The rest of this feature can be found on Culinary Backstreets [2].