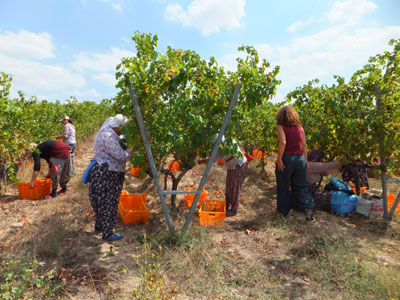 Zeynep Arca Şallıel had a successful career in advertising in Istanbul, but in 1995 she decided to take on a daunting new challenge: taking part in the revival of small-scale viniculture in the ancient winemaking region of Thrace. “I wanted to do something with soil, something that mattered a little bit more,” she says. Her father had always dreamed of making wine, so together, they started Arcadia Vineyards [2]. Their vineyards are planted on the 65 million-year-old eroded rock of Istranca Mountain, which creates a border between Turkey and Bulgaria. We drove two hours west from Istanbul through rolling hills of drying sunflower fields to learn how this pioneering winemaker is making great wines under difficult circumstances.

Arcadia made its first vintage in 2009, but the long road to that moment began in 2002, when the Turkish government legalized small-scale wine production. Previously, only companies producing more than 1 million liters of wine were allowed to exist. After the law changed, Şallıel immediately started working on Arcadia, and as a result, it is the first winery in the region since the founding of the modern Turkish republic.