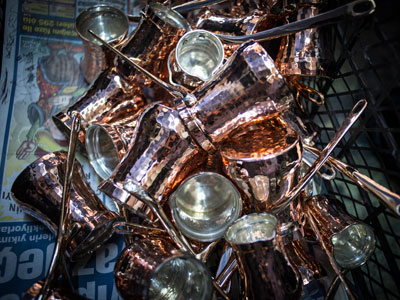 When we pick up a hefty, shiny copper pan in his workshop, Emir Ali Enç unhesitatingly claims, “You are now holding the best saucepan in the world.” Wait, he says, actually the best one is his fully silver version. Enç is the gregarious founder, owner and CEO of Soy Türkiye [2], whose copper cookware is made by hand in the Grand Bazaar in Istanbul. His gorgeous pots are used around the world in Michelin-starred kitchens and in discerning households. Soy’s cezves, traditional Turkish coffee pots, are standard equipment in international Turkish coffee-making competitions. However, Enç does not come from a long line of coppersmiths. His story, it turns out, has a few twists.

In 2010, Enç was in Ankara studying to become a Turkish diplomat, just like the seven generations of his family members before him. “I was cooking through the stress,” he remembers, “and missed using my mom’s copper pots.” He started to search online for copper cooking pots, and was infuriated to learn that France was dominating the industry. “Do they even know how to use a coppersmith’s hammer there?” he asks incredulously. Turkey, Syria, Pakistan, Iran and India have the oldest, richest coppersmith traditions, a still-flummoxed Enç says, not France. Enç decided to close his political science books and put Turkey back in the high-end copper cooking pot trade.