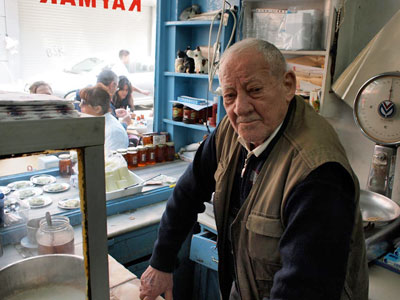 It was at a dinner at Mikla, one of Istanbul’s fanciest restaurants, that we identified a turning point in this city’s restaurant culture, one which might finally favor the informal, traditional and often overlooked local eateries that are the heart, soul and lovely underbelly of this city. In one brief description of an appetizer it was noted that the butter used was sourced from Beşiktaş Kaymakçı. Pando’s butter at Mikla? Worlds collided.

Reading those words, we pictured a future when heavily endowed chefs, like Mikla’s Mehmet Gürs, champion small, local producers like Pando – a dairyman who is one of Istanbul’s most celebrated makers of kaymak [2] – and by doing so ensure the longevity of those small, fragile businesses. At that moment, we were sure that Pando, at least, was protected.

Though Pando, who has earned the love and respect of generations of İstanbullu with a full lifetime of slinging dairy goodness from the same shop in Beşiktaş, may be an institution, he is also a renter. His father was a renter before him, since 1895. The secret to a good kaymak business might be the wealth passed down through generations of his family, but the inheritance included the burden of a landlord-tenant relationship. And this summer, an eviction notice came.

Read the rest of this story at Culinary Backstreets [3].