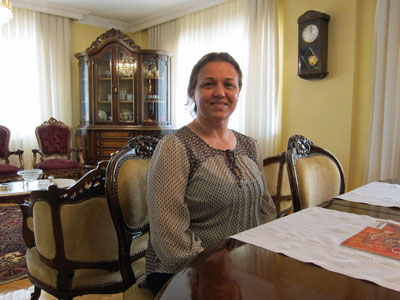 The cuisine of Antep deserves every bit of the praise it receives. In the city known as the gastronomic temple of Turkey, the world’s most refined kebab traditions are obsessively guarded by a cadre of traditional ustas in this southeastern Turkish city’s grilling institutions. Baklava workshops are steeped in an odd mixture of science and voodoo that would titillate Willy Wonka himself. But coming down from a grilled meat and sweets binge, the body wants dolma, pilav, börek and çorba – the home-style food that is strangely absent in Antep’s restaurants.

In Istanbul, daily specials in restaurants specializing in ev yemekleri, home food, regularly celebrate the humble, labor-intensive dishes specific to certain regions. Musa Dağdeviren of Çiya [2] has achieved global street cred doing just that, serving nearly forgotten home-cooked oddities from around Turkey, with a heavy dose of his home region, Antep (also known as Gaziantep, or “victorious” Antep, in honor of the role it played in defeating French forces during Turkey’s War of Independence).

The exotic-sounding stuff in Musa’s pots – mumbar (stuffed sheep intestine), pirpirim aşı (purslane stew), güveçte hisik (wheat stew with lamb) – is just a sampling of what’s cooking in homes all over Antep, every day. Frustrated by the teasers at Çiya and the taunts of people from Antep (“You haven’t really eaten in Antep until you’ve been in the homes,” is a common refrain), we sought out home cooks in Antep and finally got a taste of what we’d been missing.